I received this zine after I posted my PO Box address on Reddit. Hannah was super cool and sent me an envelope filled with zine goodness for review. 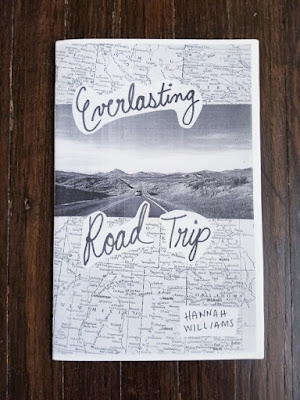 Everlasting Road Trip is a 24 paged B&W half-size zine. It is in a cut and paste collage style documenting their road trip.

It opens up with a very relatable thought, one that I have thought about many moments in my life.

"Sometimes I'm afraid that I will forget the way it felt. It felt like a dream. It felt like stepping into a movie that no one is watching. It felt like the world leaped around me in 3-D. The land was so flat but the sky opened up higher and wider than ever before and it scared me. As if the world would tilt and I would slide into the sky like dropping off a cliff into a sea. How can you get scared of heights while standing perfectly stable on the ground?"

Their words inspired so many memories to come forth, reminding me that I haven't forgotten the way it felt. Moments while I've been on vacation. Moments where I stayed out late at night just to go to a park and swing on some swings while swinging so high it felt like I could touch the sky and singing along to music so loud it felt like I could live forever in that moment. Moments spent around campfires. Moments spent walking along the ocean. So many moments.

They go on to explain this isn't about being free spirits travelling to see the country. During the first year of marriage, they followed their husband as he travelled for work. This zine is filled with little moments experienced and observed, and thoughts.

They talk about how some memories start to blend together (hotels, gas stations, streetlights passing overhead) and how some moments become forever remembered on their own (learning about & buying tire chains).

They group some of the memories together by the place they happened in. Others are a grouping of memories about different moments that are connected by a trail of thought; diners, wandering, nature.

Even though this zine is written specifically about the author's experiences and thoughts, it is a very nostalgic filled read for me. I also enjoy that I'm not the only one who thinks in fragments. It's well written, but not trying too hard. It has the distinct feel of sitting with a friend as they explain the things they did on their vacation. It's not all big flashy stories, just an honest look into a wandering life. 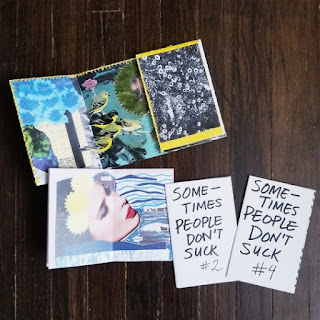 The issues of Sometimes People Don't Suck feature a single short story of a moment in their life where people, you guessed it, don't suck. They are mini zines made in a cut and paste style. If I had to choose between issue #2 & #4, I would have to say I adore issue #2. I would definitely love to see more of these in the future.

They sent me a note explaining that of the untitled mini zines "the one with the sewing on it is inspired by Cleveland's Rapid train stations, and the other untitled one I made at the Street Cat Zine Fest this past summer in Lancaster, OH." The zines themselves are beautiful, and it's awesome having some context behind them as well. I love the added touch of sewing on the one zine, and I feel inspired to add sewing to a zine as well. However, I'm fairly certain I don't have the patience for it. So I'll leave creations such as these to talented people who enjoy doing it.

If you'd like to get in contact with Hannah to buy their zines you can email them at hwilliamswrites@gmail.com
Or check out their Instagram
Or their Wordpress

Posted by Crash Reynolds at 1:23 PM